Something’s wrong; I can feel it. Every day, my pop is on the phone with India. And every day, he’s packing and unpacking clothes and other items into a backpack. He better not be leaving me; but I have a feeling that he is. I’ve been moping around; I can’t hide my feelings!

Today was different. By the end of the night, my name was T-Bone.

However, at this moment, I’m so tired that I can barely keep my eyes open. I’m ready to goto bed, but before that…

I had the best evening! PapaC and I went on an adventure; it was so fun!! And I got to see my dad’s favourite basketball team – the Glassdoor Gangstas – in action! It was the last game of the season, before the playoffs next week. I had the best time with Uncle Ryan & Aunt Sarah, Uncle Chris, Uncle Carson, Uncle Garrett and Uncle Mike! They called PapaC “coach” though I’m pretty sure he doesn’t know a thing about basketball. As for me on the other hand, I’m amazingly good and for the life of me, couldn’t figure out why my dad wouldn’t let me into the game! I made that known a couple times in the court. Besides yelling at my pop to put me in, I was yelling at the refs too. My uncles were getting mauled in the paint all game! If I were in there, that would definitely not happen!! I would have bitten #23; he was dropping too many points against my uncles. We definitely had talent. Uncle Ryan had a nice J. Uncle Chris could crash the boards. Uncle Carson could jump out of the gym. Uncle Garrett had a good all-round game. Uncle Mike clogged the middle. Still that being said, we ended a big man and a guy who dish the ball; my dad said that Uncle Mark was hurt and Uncle Mike went to the Giants game instead.

After the game, my dad, my uncles and aunt had dinner at Rogue. We went into and thru the bar inside to the patio in the back. It was nice and cool and I loved it. I especially loved being looked at and talked about. I’m so good looking. PapaC kept introducing our waitress to Uncle Garrett though I’m not sure why. She was nice and for someone missing two legs without a big tongue, she was ok looking; nothing like having four legs and a big tongue! However, she forgot my bowl of water a couple times and she brought Uncle Chris one champagne of beer instead of two Pabst Blue Ribbons like he had originally wanted.

I really liked my uncles. I would get under the table, and lick everyone’s legs. I even jumped onto the bench to lick Uncle Carson all over. His sweat tasted really good! He must have really liked it, cos he kept saying “stop” and laughing. So I licked him more. I had pictures taken with the team; and another one with Uncle Garrett – and all got posted on Instagram. I was going to be famous! I was going to introduce him to some women I met at the bar earlier. They really liked me, but they weren’t my type. Since they were missing two legs like my uncles, I thought that’d be a better match. Later in the night, at the Board Room, I jumped onto Uncle Chris from the back and went to town. I wanted to show him how much I liked him! My pop didn’t like that; I’m certain Uncle Chris loved it. People need to know who’s boss.

It had been a long time since I had been to the city – Chicago was a distant memory and we didn’t go into San Francisco that much. The drive across the majestic Golden Gate was exhilarating; though the temp literally dropped 20 degrees from the Sausalito side of the bridge to the San Francisco side. I loved seeing the Palace of a Fine Arts as we drove thru the Marina. I really liked the North Beach area where we ended up; it reminded me of Wicker Park in Chicago. Lots of energy. Lots of life.

And that’s where I end with tonight before closing my eyes. I love my life. And I especially love my life with my papa and with the Glassdoor Gangstas. 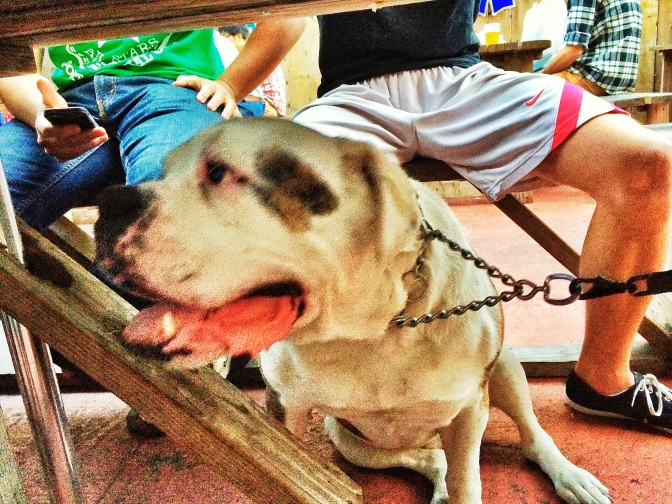