Over thirty years after my love for baseball commenced, I finally attended a game at the hallowed grounds of Fenway Park. And like the dream that started with my dad and my sister at Camden Yards in Baltimore over Labor Day weekend, it became a reality. A few years ago, I took a tour of Fenway. It was magical; but it wasn’t the same as watching a game there.

“I think I’m supposed to take you to a game at Fenway Park!” (Field of Dreams)

And so I went.

Like I did when I visited the empty ballpark several years ago, I took in all of its memorable spots – the seat where Ted Williams (the greatest hitter who ever lived and a true American hero) last homer landed, Pesky’s Foul Pole, the Green Monster, the section with the original seats (which is actually where we sat, a sobering example of how big Americans have gotten, as the seats that comfortably fit the average American back then is now a tight squeeze for most, even me, admittedly not a big man), the old school scoreboard, the closeness of the stands to the action on the field.

I’ve lived in Wrigley for so many years, most of my life in fact. My last year before moving to the Bay Area, I even had season tickets. In a miserable season where they were in last place, the Cubbies were actually 13-7 in games that I attended, 7-1 when I was sitting in my seats. Unfortunately, they didn’t win much unless I was there.

But Fenway was different. Whereas the Cubbies were the lovable losers, the Red Sox were anything but. They fielded many powerful teams, who until 2004, all of whom would lose in the most dramatic, epic, gut wrenching fashion amongst any team in any sports. Their fans (including me who is a lifelong Brooklyn Dodgers fan, who knew a thing or two about gut wrenching, epic losses) had been through the highest of highs only to be brought down by the lowest of lows. Carlton Fisk’s Game 6 home run only to lose the next game and series to the Reds in 1975. Fisk was actually in the stands and received a standing O with his mug up on the big screen. And despite his recent troubles, still a hero to many in Boston. I can’t write the words “The Impossible Dream” without getting chills and a lump in my throat thinking of their 1967 season – a season when Carl Yastremski “Yaz” won the triple crown – in a three-way duel between the Bosox, the Detroit Tigers and Minnesota Twins – an epic American League season that came down to the final game – only to have the Red Sox lose to the Cardinals in seven games, Bob Gibson showing the world he’s one of the greatest pitchers of all time (a repeat of the 1946 series again falling short to the Cardinals in seven, led by their iconic leader Stan “the Man” Musial).

Of course everything changed in 2004. Big Papi, Manny Ramirez, Pedro, Schilling, the Idiots, Cowboy Up, Red Sox Nation. In the last ten years, harkening back to the turn of the previous century, the Red Sox are (except for this year) consistently one of the best teams in the league, having won three World Series Championships. Of course, nothing will beat the first, in 2004, when the Curse of the Bambino was broken.

Whenever I think of the Red Sox, I always think of The Greatest Hitter Who Ever Lived, aka The Kid aka The Splendid Splinter aka Teddy Ballgame – Ted Williams, also one of the great American Heroes, a man John Wayne played in the movies that Teddy Ballgame lived in real life.

I became a Dodgers fan when I was a little kid as I was learning how to speak English. And the same time, I fell in love with the Red Sox as my American League team. I hated my and my teams’ common enemy, The New York Yankees. But like a true Sox fan, respected their legends. I had a conversation with my client at the game about Yankee stalwarts Derek Jeter and Mariano Rivera. A tried and true, born and raised Sox fan, he liked them both, cos they played the right way and they respected the game. He didn’t like A-Rod. I agreed wholeheartedly, on all counts. Living in Chicago for twenty years, especially during the magical run of 2003, I also became a Cubs fan. I was swept away by the electricity of the Chicago Northside, who hadn’t won a championship in a hundred years. (By comparison, their Southside compatriots – or nemesis, in some circles – would win it all two years later.) San Francisco Giants fans can relate. What I realized then, and know even more now is that I love the game. The game itself gives me chills. Certain images without fail always give me chills –  Jackie Robinson stealing home… Koufax with his signature delivery and the greatest five-year stretch of any pitcher in the history of the game… Clemente rounding the bases in the 71 World Series, wearing his Pirates uniform with pride… Mays running full sprint towards the wall at the last minute stretching out his arms for the ball to fall into is glove then wheeling around for the double play… Ripken running the outer edges of Camden Yards when he broke Lou Gehrig’s record… I love baseball. When I don’t have a vested interest in the teams, I always root for the home team when attending a game. And that brings me back to Boston.

The Dream continued last night in Fenway Park. It was as if I had dipped myself “in magic waters.” We sat in Section 25 of the Grandstands. The park is so intimate with its size and dimensions, you can feel the action on the field. It’s no wonder Sox fans have such a close affinity with the ballplayers on the team.  I felt like I was right there with Papi on every one of his swings. I gasped at every swing. I jumped at every hit. Conversely, as I rooted for the Orioles a couple weeks ago at Camden, I rooted against them for my Red Sox. When Adam Jones tattooed a shot over the Green Monster, I hated it; but like a true Sox fan, I admired it as I joined the capacity crowd in congratulating him. Sox fans are a different breed. They appreciate baseball. I now knew what it meant to watch a team that I loved at the place they called home. It didn’t matter that this was not their year.

Like the Orioles did on my visit to Camden against the Twins, they buried the Bosox on the long ball, including the moon shot by Jones as well as a pair by De Aza. Bogaerts did land one over the fence for the good guys, but it wasn’t enough. It wasn’t the Sox’ night, a microcosm of their entire year, a far cry from the last one when they were sitting atop the baseball world (an epic response to the tragedy of the Boston Marathon where the entire city needed their team to win galvanized into a battle cry, “Boston Strong”).

I didn’t want to leave. And someday soon next season, I’ll be back.

PostScript. Clad in a Red Sox ballcap and windbreaker, a passenger on my flight back home the next day asked me if I played ball with the Sox. I coolly replied, “No. I retired five years ago.” 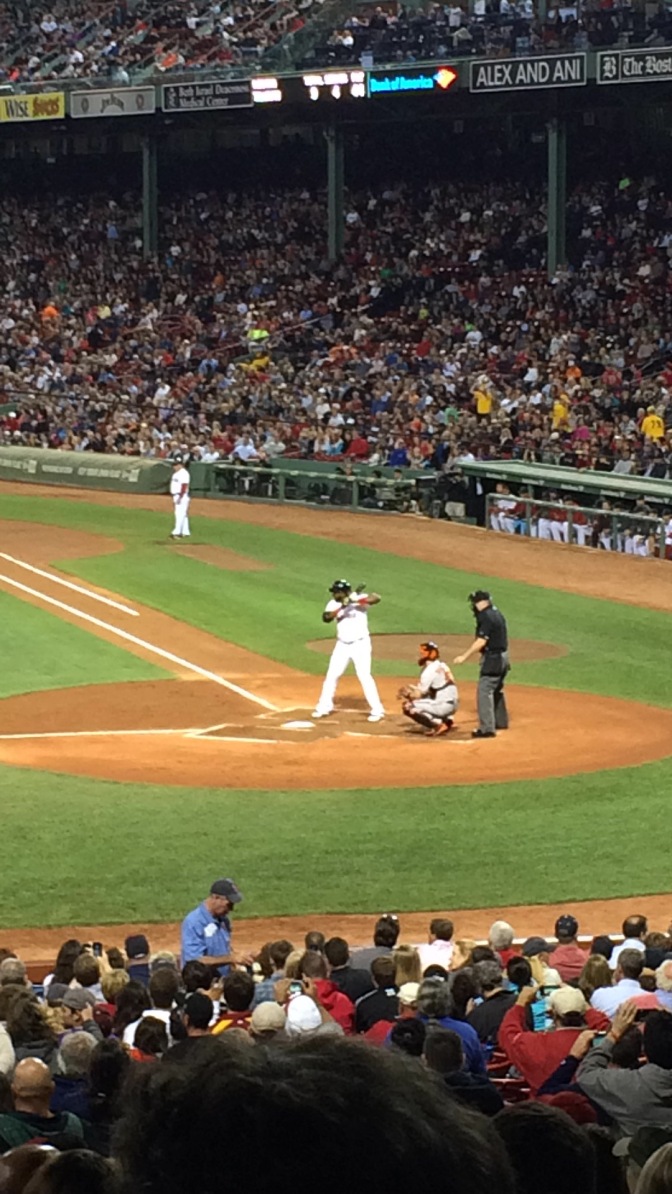 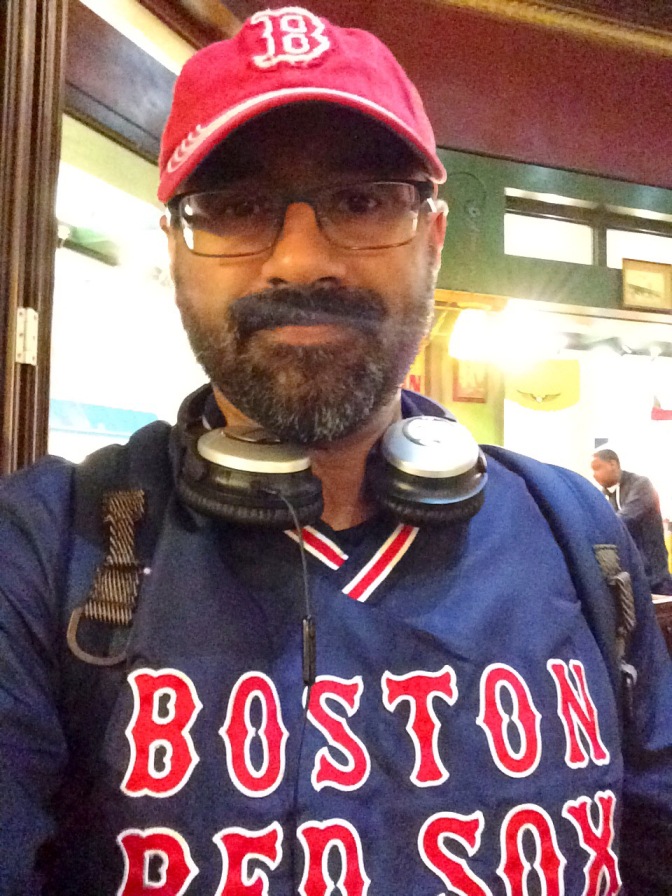