The story of sports is the story of redemption. It’s the story of perseverance. It’s a story of the human condition, of life — filled with moments of tribulation and triumph, the ebbs and flows between each.

For me sports will always be the story of my brothers and my sister, and the story of our youth. To this day, with the advances of technology, my brothers and I have daily text conversations about sports. They love the New York Giants and the Denver Broncos. And they’re insane about both teams; I use the word lovingly, but they are truly insane. I know a lot of passionate fans, and I love the passion sports evokes. These two guys are on another level.

Today, I watched Ken Griffey, Jr. and Mike Piazza accept their induction into Major League Baseball’s Hall of Fame. Griffey was the overall #1 pick in the 1989 MLB draft; and Piazza was selected in the 62nd round the previous year — #1390. Piazza told the crowd “The only way I ever thought I would be here with you is if I bought a ticket. It is a testament to our great country and game that dreams can come true. You just need to be willing to pay the price.” Words that any of us, whether in sports or not, can hold onto.

In my opinion, Griffey Jr. is the greatest baseball player I’ve ever seen. He missed almost 500 games due to being on the DL twelve times. His stats are on another level; I wonder what it would have been if he had not missed so much to injury. He was introduced as the “owner of 630 home runs, ten gold gloves, a five-tool player whose charismatic impact on the game goes on now. A 13-time all-star, he was a unanimous selection for the 1997 American League MVP.”

Piazza was introduced as a “12-time all-star behind the plate. He hit 427 home runs, a record 396 as a catcher, the ’93 National League Rookie of the Year. He was a ten-time Silver Slugger award winner, six seasons with at least a 300 batting average, 30 homeruns and a 100 or more RBI’s, the most of any backstop in the game’s history.”

Both speeches were tearful. I loved how Griffey, Jr. ended his by turning his ballcap backwards, the trademark to his playing days. I had wanted Piazza to go in as a Dodger, one of my favourite players during his playing days with the beloved team of my youth. Even though he didn’t and decided to enter the hall as a Met, I loved how Piazza gave nods to his fellow HOF inductee… to his childhood hero Mike Schmidt… to, in his words (which everyone will agree), “the greatest catcher of all-time” Johnny Bench. My favourite was his tearful thanks to his family and his thanks to Tommy Lasorda (who at first had tears, then seemed to fall asleep) and Reggie Smith, a favourite Dodger of mine, both of whom were instrumental in his early development.

“There are a handful of people you’ll meet in your life that will change your destiny. Reggie [Smith] was that for me.”

Even before the ceremonies started, Tom Brokaw narrated two minutes and fifty-five seconds of this poignant verse to introduce the HOF ceremonies. I replayed it for thirty minutes. Each time, I had a lump in my throat.

“Tucked away in the northeast corner of the US, there is a small town where tomorrow never comes. A quiet place with a majestic hall. A brick and mortar temple to the American game. Here, the warm glow of bygone days are collected and safeguarded for all time — artifacts of greatness, legendary tools of a beloved trade. But whenever the present turns its eyes to the past, the most coveted treasures are the heroes… Seaver is getting tougher and tougher as the game moves along… The magnificent Yankee Number 7 Mickey Mantle! …The greatest hitter that ever lived! “I will be swinging and it might mean the ol’ ball game!” Icons of a prized lifetime whose lives on and off the field, have the power to change us forever… Now here’s Robinson coming into picture. You see the first colored fella that ever came in. “Thank you very much Mr. Rickey. I am certainly delighted with my contract.” Strength with class. Determination wrapped in hope. Within these walls, you will find the pride of a nation… Today, I consider myself the luckiest man on the face of the Earth… Our desire to overcome is personified here, and every now and then, hammered home… He’s sitting on 714. It’s gone! There’s a new homerun champion of all-time! …Mazeroski hits it over the left field fence for a homerun! And the Pirates win it 10 to 9 and win the World Series! Our story lives within these walls, triumphs of will and spirit alongside losses we’ll never forget. But even the past is an ever-changing place. And once a year, cherished heroes welcome new ones to these hallowed halls. As we select these boys of summer to become men for all time.”

I couldn’t stop smiling as they were being introduced by a sliver of their accomplishments, walking out into the dais. I couldn’t help it, but I pumped my fists in the air, and started yelling “Pudge! Pudge!” when Carlton Fisk walked out…. screaming “Hawk!” when Andre Dawson was introduced… tears joining chants of “Adrosal! Adrosal! Adrosal!”, an ode to both my favourite manager of all-time Tommy Lasorda (who always prayed to that Great Big Dodger in the Sky) and Harry Carey… “Cal! Iron Man! Iron Man! Iron Man!” when Ripken walked out… quietly mouthing in admiration “The Wizard of Oz” as Ozzie Smith entered the screen, the architect of so many of my losses of the 80s… “Rhyno!!! Rhyno!!!!” to welcome Ryne Sandberg… not to mention my admiration as Robin Yount, George Brett, Sandy Koufax, Pedro, and the Big Unit walked out, all players I loved watching.

Man, I’m such a geek.
I love baseball. 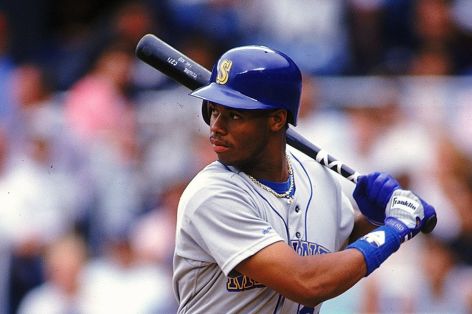 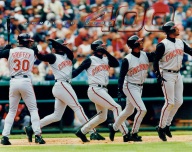 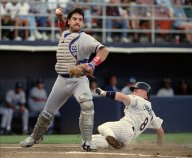 Los Angeles Dodgers’ catcher Mike Piazza fires a throw to first after stepping on homeplate for a force out and then completing a double play as San Diego Padres’ Scott Livingstone slides in during the first inning of the Dodgers game against the San Diego Padres Wednesday July 3, 1996 in San Diego. Piazza had fielded a swinging bunt with the bases loaded and completed the double play to end a Padres’ threat. (AP Photo/Lenny Ignelzi)

CIRCA 1990’s: Outfielder Ken Griffey Jr. #24 of the Seattle Mariners swings and watches the flight of his ball during a early circa 1990’s Major League Baseball game. Griffey played for the Mariners from 1989-99. (Photo by Focus on Sport/Getty Images) 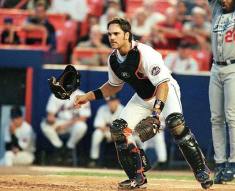 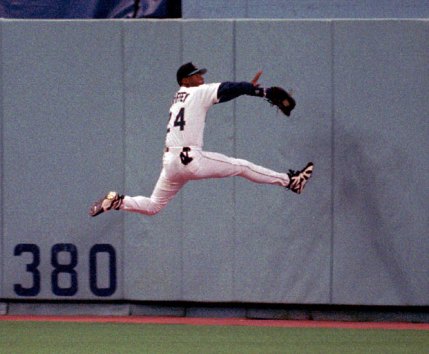 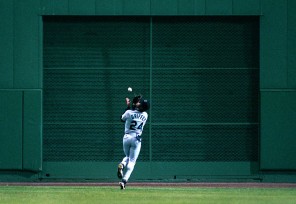 7-27-97:Boston:Seattle Mariners centerfielder Ken Griffey, Jr. makes a nice running, over the shoulder catch of a shot off the bat of the Red Sox Shane Mack to end the seventh inning. 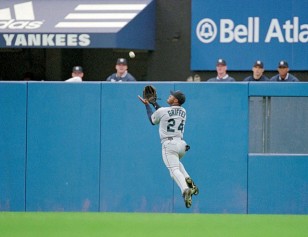 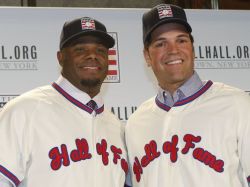 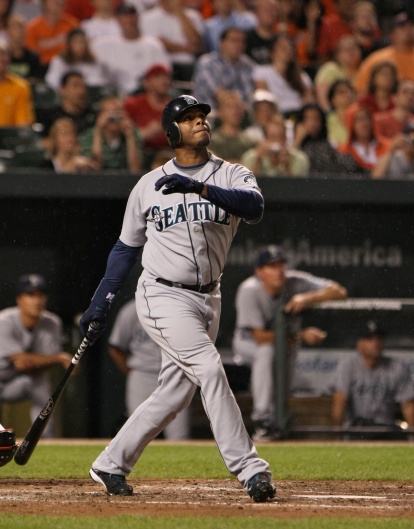