My name is Taylor and I’m a 100 lb American Bulldog. I am eight years old. I am big and beautiful. I have a brother named Lawrence who just passed away. We are both huge New York Giants football fans. He lived with my other dad – Papa-G. I grew up with my brother and Papa-G for the first four years of my life before moving in with Papa-C.

Papa-C and I had been on an epic road trip that took us from San Francisco, CA to Moab, UT to Fort Collins, CO to Denver, CO to Indianapolis, IN to Chicago, IL. We stopped along the way for family and friends, for adventure. We loved to live life. And so we did.

That part was great.

When Papa-C left for Chicago, I jumped into our car. I wasn’t about to let him leave without me. And so we made the drive from Indy to Chicago on a cold grey day. When we got onto the Dan Ryan, I could tell I was going to be home soon. It had been so long since I’d last been. And when I got there, I made myself at home immediately. I looked through the floor-to-ceiling windows onto the street and I could see the traffic pile up on the street and on the highway before me. I could see tall buildings that used to be my every day view while Papa-C was out to the office.

He left and came back later that night with Papa-G and Mama-K!! You see, Papa-G and Papa-C were also brothers, just like Lawrence and I were. And Mama-K was my mama. The band was back together. And we would be listening to lots of music tonight!

I was so happy! I barked and I was running in circles in the back of Papa-G’s SUV. I wanted them to know that I couldn’t be happier to see them all together and that I would do everything possible to make sure they had a great time.

So we went back to my old home where Papa-G and Mama-K lived. I ran back and forth. Papa-G gave me a bone which I was devouring every moment I wasn’t playing with my parents. I made myself at home. I slept on both couches. I slept on my bed. I slept on Papa-G & Mama-K’s bed. I wanted to make sure they could smell me whenever and wherever they slept. I was doing them a favour; I smelled so good. I watched TV with them. I listened to music with them. They were loud. But I was louder. This was the happiest I’d felt in a long time.

Papa-C left later in the weekend. I was bummed to see him go; he was leaving for Washington DC and would get me on the way back. Until then, I was on vacation with my first parents. 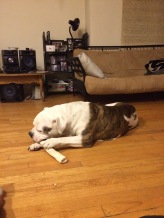 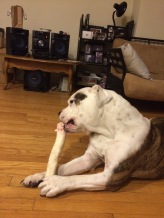 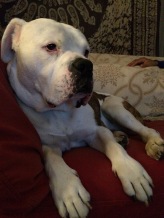 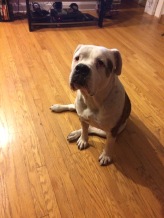 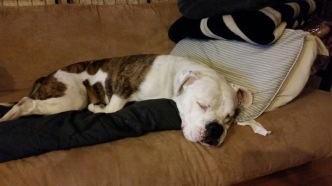 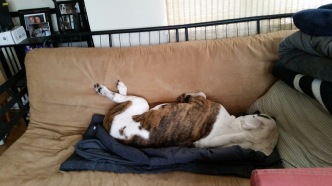