Why did I do this? I’ve been walking funny for two days. And in serious pain. Originally, this wasn’t even a thought in our minds; we had our calendars already packed with activities for the month. Before I knew it, we were signed up for two nights and three days. Beulah was not a kind woman. And that wasn’t even her name. Thank goodness at the last minute, we changed our minds for only one night and two days. Beulah still had the last laugh.

We had just arrived in Jaisalmer after an all-night bus ride from Udaipur.

“Dude, that was the worst fucking ride ever! Who ever thought having square wheels on a bus would be a good idea!?!?” DaveRisner was exasperated.

“I slept like a baby!” I felt bad for the other guys. I can sleep through anything, anytime, and anywhere. I thought DaveRisner could too, but apparently not; or at least not like I can. Admittedly, last night even getting to the makeshift “bus stand” in Udaipur was a challenge. At best.

And yet we made it.

Here we were in Jaisalmer. Directly before us, dominating our view, was the fort, resplendent in the morning light. To our right was the bhang shop, which we were later told was the only legal shop carrying it, its proprietor a man named Dr. Bhang, with broken teeth, yet despite it cooler than cool riding his motorcycle like he owned not only the shop, but also the fort and makeshift city surrounding it. But Dr. Bhang was for later; we wouldn’t meet him for another couple days. We walked right into the tiny headquarters for Trotters Independent Tours and Travels, the tour operator I had been in contact with in the States to book our camel safari. Derek had mentioned to me months ago that he had heard great things about the camel safari in the Thar Desert outside Jaisalmer, just a mere 30 km from the Pakistani border. We had to do it.

Sleeping under the stars sounded like a perfect idea. Sign me up for two nights! And so we did.

It was Thursday, 31 March; and we were required to check in, according to the information on the Adventurists’ website for the Rickshaw Run. We would be test driving 1 to 3 April, while the party was Saturday night, the cricket match Sunday, and the race would start Monday.

Upon emailing our contacts at the Adventurists, we found out that we technically were not required to arrive on the 31st (though it was suggested) and that as long as we got there by Sunday to register and get the keys, all would be good. We wanted to attend the party; and so with that in mind, spending two nights under the stars seemed like a good idea. As long as we arrived back at the Adventurists’ makeshift Jaisalmer headquarters at the king’s palace — Jawahar Niwas Palace — by Saturday (to attend the party), everything would be just fine.

At the last minute upon arriving at Trotters, we decided it best to limit our excursion to one night. I’m not even sure why or how we came to that decision, but in retrospect, my balls thanked the powers that be (me and my gang) for making the change. We went straight to the Gajju Palace, the hotel we had reserved for our stay in Jaisalmer after the camel safari, showered, locked up the majority of our luggage, and went outside to be picked up by the driver to take us to the desert.

An hour ride on the jeep where we rejoined Tamas and Jane, the couple whom we’d met on the bus ride the night before (and turned out was indeed married — thank you, DaveRisner) brought us straight into the desert. The heat was scorching, the ground hard and dry with the dust flying. We soon met the rest of the group and immediately became fast friends with three people who we would soon find out was racing in the Rickshaw Run with us — Paul, his girlfriend Lisa and his brother Anthony. Paul & Anthony were from the UK; and Lisa from New Zealand. (More on these fine people later in subsequent entries.)

The guides were off to the side under a tree cooking all sorts of traditional Rajistani foods for lunch; the fragrant aromas filling the air tantalized our senses. The food couldn’t arrive soon enough. To pass the time, besides talking to our newfound friends, I made my way over to the camels, introducing myself. Camels are so ugly, they are beautiful; and I as mesmerized by them. There were nine or ten of them, either laying down on all fours, or standing straight eating the leaves from the trees.

For lunch we had vegetable pulao (rice with lightly spices mixed vegetables), aloo gobi (potato with cauliflower), chili chutney (chili, garlic, and spices — served on the side, intensely spicy hot and the best thing I had my entire trip; I could not get enough of this, though this eventually got DaveRisner intensely sick), and chapatti.

After three hours breaking in the midday sun for lunch, the guides cleaned up our campsite. We boarded the camels, and trekked to our eventual spot in the desert for dinner and sleep. Riding a camel (I had named her Beulah) was like nothing I’ve ever ridden before. I’d never ridden a horse, but I’d ridden elephants. The first few moments were fantastic, as Beulah sashayed back and forth, her gait very responsive to the terrain. For the first time, I was taller than my friend Aminu (who happens to proudly stand at 6’9”, the only man I concede is taller than I am). Luckily, I wore a hat to protect my head from the hard sun, bandana to cover my face, SPF50 shirt, and pants, all loose and light on my body, with my trusty Red Wing boots. I was protected from heatstroke with what I wore, drinking tons of water.

None of it helped, however, when the novelty of riding a camel wore off fairly quickly. I felt every step; Beulah was unforgiving as she let me feel everything her feet felt on the ground. My lower back was in excruciating agony. My hips and pelvic bones were turning inside out. My balls were being slowly destroyed. Any change in terrain that went downhill made everything worse. The few times, we caught an uphill slope, my body had a brief reprieve. I smiled and laughed cos I was in so much pain.

Most of the guides walked the entire journey, obviously smarter than the tourists. I could imagine their conversation now, “Can you believe we can make money by charging foreigners to ride our camels?!?!?! That’s some crazy shit!! Why didn’t we think of this before?!?!”

Our view was beautiful, but a different kind of beauty. While my idea of natural beauty generally centers around oceans, mountains and forests, there was definitely something to enjoy and admire about the desert. The different shades of brown shone in the midday heat; and started showing its personality as the sun started to go down. The dunes made for an even grander, more elegant site.

After our first break when I led Beulah to water (at which point I found out her name was Dali), the heat started to dissipate just a bit. And soon we found our spot, had camp set up, and started popping beers. King Fishers tasted especially good quenching our thirst as the sun went down.

For dinner we had daal, seasonal mixed vegetable curry (including onion, tomato, potato, cabbage, spinach, cauliflower, carrot, and local specialties), again some more chili chutney (chili, garlic, and spices), rice, chapatti, and kheer (rice pudding with cardamom, which I stayed away from — I cannot stomach Indian desserts, except for ladoos). And loads of beer!

Before the sun went down to a somewhat lackluster sunset, the guides had set up cots for each of us, with thick blankets on it for our comfort.

We passed out by 8:30 or 9:00 PM, the sky was pitch black. Not a sound was to be heard, when all of a sudden my eyes opened at 1:00 AM to a brilliant sky lit by stars everywhere and a moon, though not full, extremely bright. I wrote in my journal and I took pictures. It was stunningly beautiful. It would be 3:00 AM before I would fall back asleep. 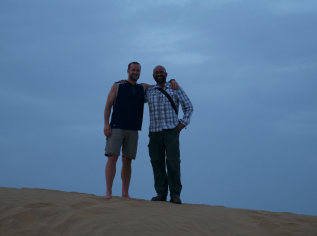 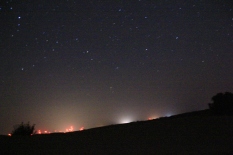 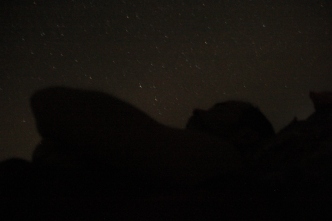