Leaving Bombay was a bit bittersweet. Still very much at the beginning of our trip, it has seemed like we’ve been here for months instead of just five days. We did what most people do in big cities. We went sightseeing. We went bar-hopping. We went clubbing. And now with India’s movie capital firmly entrenched in our rearview mirror, a heart our buddy Joe O’Leary would have been proud of, bid us farewell from the airport in Bombay. Udaipur was next.

Pierre Loti, a French naval officer, traveller, and adventurer, at the turn of the 20th century wrote, “As we approach, the white masses of palaces and temples are visible from a great distance surrounded and enclosed on every side by a background of peaked and lofty mountains the sides of which are clothed with forests. In the midst of exquisite natural scenery, the city has become a sort of a nest of peace and mystery”.

By the time we arrived at the Hotel Thamla Haveli, it had gotten dark. The forty-five minute drive from the airport was fairly uneventful, bland until arriving closer to the city. Udaipur has an intricate network of lakes and water passageways. From where we were destined to be, it has two large bodies of water — Lake Pichola and Fateh Sagar Lake — and the smaller Swaroop Sagar which sits in between the two. Our hotel sat against Lake Pichola, famous for the Taj Lake Palace and Jagmandir Palace, which was a principal set piece in the James Bond movie Octopussy. Once the highway turned into University Road entering the city limits which veered south changing its name to Jariya Marg then Pannadhay Marg hugging Swaroop Sagar, we crossed the lake over a bridge and finally turning left onto Branhmpol Road, the roads getting more and more narrow, by now something we had become accustomed to and in this particular instance took us all the way to the hotel.

A typical Rajisthani room greeted us once we checked into the hotel, with a large bed, low to the floor located in the center and a daybed outfitted with burnt orange and sea-green pillows by the window overlooking Lake Pichola. After dropping our bags, the guys rested up while I went to the hotel’s beautiful rooftop, from where I could see a brightly lit bridge to my left, the Chand Pole Puliya, the Gangaur Ghat directly in front across the shores of the lake, and the Mohan Temple to my right on the lake itself. The massive City Palace loomed in the distance on a hill on the other side of the lake, also brightly lit for a bit. The lake shimmered with the lights still lit. As I closed and opened my eyes, the sounds of the city came alive.

We entered Udaipur with this declaration on Facebook: “Just arrived in Udaipur, the “Venice of the East”, long considered one of the most romantic cities in the world. So of course, I am here with DaveRisner @cecilpuv @derlay …check out this stunning rooftop view from our quaint Hotel Thamla Haveli.”

That night, we enjoyed a full course Rajistani dinner on the rooftop of the hotel across the street, with the cricket match projected onto the wall of the building opposite to us. It was wonderfully dark outside, with only the candles on the table before us and the lights from across the lake shining through shimmering on Pichola. We had our fill, relaxed watching the match, had a conversation with a gentleman who tailored custom-made suits and shirts, before heading back to our room.

As much as I loved the city lights at night, it was sunrise that I really wanted to see. Awakened to the Muslim call to prayer, once again I walked upstairs to the rooftop, sat on the cushions of the pagoda located on the end looking over the lake. DaveRisner, who didn’t care for sunrises and sunsets as much as Derek and I snored away. Derek was upstairs too. The lights under Chand Pole Puliya were brightly lit, its intensity only dwarfed by the lights from the Gangaur Ghat. In some ways the colours we saw were reminiscent of the colours I see daily off the balcony at my home in Sausalito. Amidst the chants, women slamming their clothes washing against the ghats, and the quiet movement of the water below me, the sun rose. On this particular morning, I felt like I was part of today’s birth. We hadn’t really even done anything since arriving, and I had already fallen in love with the city.

Rudyard Kipling once said, rather succinctly, wrote “No tour of India is complete without seeing Udaipur.” 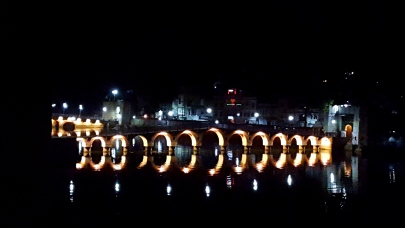 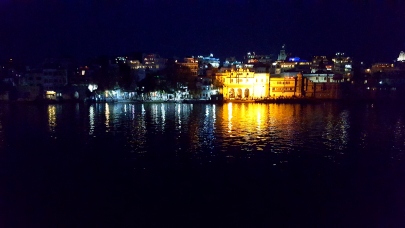 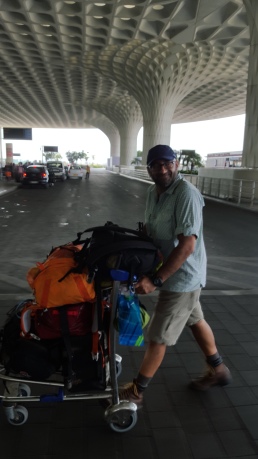 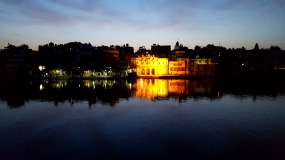 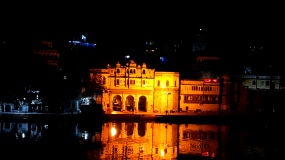 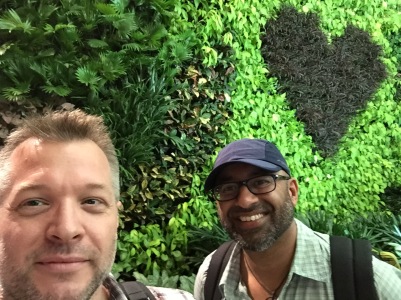