Taylor and I arrived at a log cabin made of earth and wood at the Lazy Lizard Hostel in Moab, Utah at 2 AM. Joe and I gave each other a big hug; and DaveRisner sleepwalked right past us from the outhouse to his bed. Three hours later, we awoke to start our epic day.

I have been here before. It’s one thing to visit Arches National Park as part of a company event, as I did years ago. It’s another to camp and hike there by yourself, as I did twenty months ago on my road trip from Chicago to San Francisco. And then there is taking it up a notch another several levels hiking it with Joe. And that’s what I signed up for today. I was excited. And I was ready. Or so I thought.

Ever wake up one morning and know you were about to push the very limits of your physical ability, scared that you might fail, and yet push forward anyways? Today was one of THOSE days. Some days you are meant to lead. I’ve had those days. Others you are meant to follow. Today was that day. And on those days you decide to follow, it’s paramount to have a leader you trust implicitly. I had one of those today, my friend Joe. He led me and our friend DaveRisner (who often would introduce himself as “Hi. I’m DaveRisner. I’m better than average…” with that introduction, you know things were only going to get better). Our leader for the day, as well as one of our closest friends, Joe is an adventurer. A one-time white water rafting instructor, who has hiked the entire Appalachian Trail spanning a few months of his life years ago, a mountain biker high up in the mountains under a full moon, Joe is the epitome of an explorer and an adventurer. And not only is he that in a physical sense, but he is also that both mentally, emotionally and spiritually. A hike with Joe, you’re testing your limits on all fronts. And yet, because he is so kind and considerate, he won’t put you through something in which he doesn’t believe you are not capable. Because of that, a day with Joe will truly be one of the best days of your life.

Our first stop was Delicate Arch and Frame Arch. Joe walked with the ease of a professional. DaveRisner kept a steady pace. I was huffing and puffing a distance behind. I had hiked many times before. I was a hiker. But this was different. It wasn’t even 7:00 AM, and I was thinking to myself – ‘what did I sign up for?’ My excitement in the days leading up to this morning had quickly vanished. That was the bitch of it at that moment. I knew what I wanted; but at that moment for quite some time that morning, I had wondered whether I really wanted what I wanted. And was I even capable of accomplishing what I wanted? Fear and doubt crept in.

We were only the second group to arrive. Pretty soon, we were the only ones there. We were there for a long while, taking in the beauty of the Utah landscape. We walked. We talked. We laughed. We took pictures; we took selfies and wefies. I wrote. I sketched. Delicate Arch is exactly what her name implies. Massive yet delicately positioned. I fear she may fall someday, as we all someday do. But instead of getting up, which is what we do, she won’t. And so while she stands, we stand there in admiration of her strong, delicate features, as the sun shines thru her hole laying a beautiful shadow against the rocks opposite it. From Frame Arch, we had the best of view of it all. Aptly named also, for a view thru her, we could see a window into what Arches truly was. It was a scene from a photograph that would be replicated over and over. The hike to both arches and back was 2.8 miles.

After Delicate Arch, we stopped to have snacks at Devils Garden Trailhead. From Devils Garden, we hiked a lollipop passing Tunnel Arch and Pine Trees Arch onto Devils Garden Primitive Loop (with a view of the Landscape Arch to our left) walking by the aptly named Fierce Stork (ok, we made that name up, but you’ll see from the picture we nailed it), past the northside of the Double O Arch and straight to Dark Angel to stop for lunch and take in the scenery. We then looped back walking and circling around the Double O to catch it on its southside, then a view of Black Arch in the distance before coming back to Landscape Arch. By the time we were done, we had hiked six miles.

I’m afraid of heights. And yet I have put myself in positions over and over again to conquer that fear. I have been on the skydeck of some of the tallest buildings in the world including the Sears Tower and the Empire State Building. In New York, I took lessons at the New York School of Trapeze. I have rappelled down the face of a rock near Arches in Utah. I have jumped out of a plane outside Lake Meade, NV. My fear is still alive and strong; and I have found that no matter what I do, I cannot conquer that fear. What I have figured out though, is something even more important. I am no longer afraid of being afraid. Fear is my friend. Her son and daughter are caution and awareness.

Caution and awareness help me manage my fear. As the day progressed, and I didn’t even realize it as it was happening until later in the day, I became increasingly stronger and more confident in my steps. My footing was more sure. I was put myself in strange and interesting angles against the rocks to get me from point A to point B. Even I was surprised by my nimbleness. At one point I had confidently walked up to the very edge of a massive rock, looking down below at least one hundred feet and looking out over the entire expanse of the national park. I caught an intense and spiritual moment of peace as I knew I was standing in a place of strength and achievement that I could not have fathomed that morning when I was gasping for air. Rotating my head kept me humble as vertigo set in giving strength to my fear. And I did not back down, remembering my breath as my yoga instructor and friend Robert always told me. And so I focused on my breath. One after another. It was magical. I was transported to a time and a place that was here but not here. At that moment, I was the best version of myself.

And so we had put ourselves in Joe’s hands, under his watchful guidance and stewardship and friendship. When I looked back upon the day, tired and laying in bed inside the log cabin the four of us (including my dog) called home, I couldn’t have been more proud of our accomplishments.

Today was a good day. 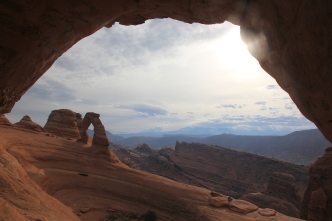 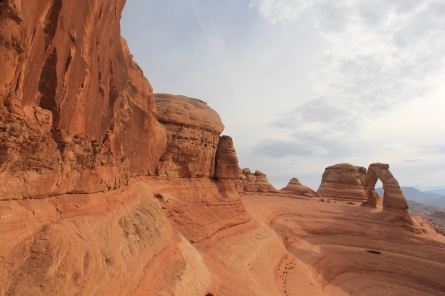 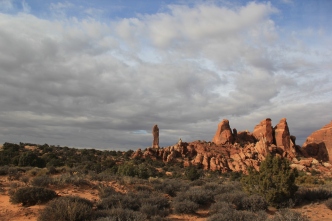 One thought on “I Am Not Afraid of Being Afraid”