At the AT&T Park watching the Chicago Cubs visit the San Francisco Giants for game two of their three game series.
Last night, I sat in row F on the field club level, four rows behind the Cubs dugout. And we won.
Tonight, I sit fourteen rows back from the third base foul line along the outfield where the Giants’ pitchers warm up.

To the left of me sits a season ticket holder named Rob, who’s had these seats for ten years. He’s been to every playoff and World Series games except the one game they lost at home last year. That’s quite an accomplishment, one a Cubs fan is genuinely jealous of. When I answered that I live in Sausalito to his question whether I lived in San Francisco, he responded with “Oh, you’re one of those.” I couldn’t help but laugh, cos I used to routinely make fun of people who said they were from Chicago but were actually from Arlington Heights or some other suburb.

Behind me was a gentleman with a Foo Fighters t-shirt and a Chicago Bears ball cap. He was definitely on the right side of the law. Turned out that he was a sportscaster for the ABC affiliate in Indianapolis. Super nice guy and was great to talk sports with him. He was in town for NASCAR at the Sonoma racetrack.

Besides the game, I was excited to be reuniting with an old friend from high school. He had brought his ten-year-old girl with him to buy her a crabby sandwich (which, though overpriced, I found quite amazing).

The last time we saw each other was 1985 in QuickDraw McGaw’s computer class. I’m not sure why we called him Quickdraw, but call him that we did. I don’t remember what we learned, but I do remember taking the class.

Some things have changed.

Say what you will about the bad of Facebook (and there’s a ton of bad), but I do love the fact that you can stay in touch with family and friends as well as reaquaint yourself with friends you haven’t seen in years.

Oh by the way, the Cubs lost.

Secret of My SucCecil: Reunion 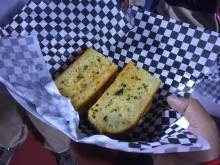 Secret of My SucCecil: Crabby Sandwich 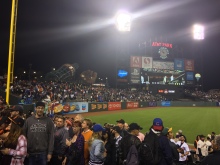 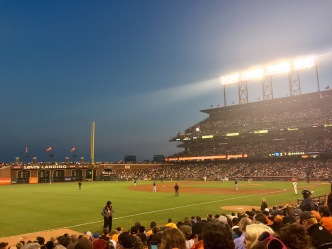 Secret of My SucCecil: Game Over – Cubs Lost

3 thoughts on “Reconnecting at AT&T Ballpark”