Pushkar was beautiful, and if this were any other trip, we would have stayed another two or three days appreciating one of India’s holiest cities. But this was not just any other trip. This was the Rickshaw Run. And in the Rickshaw Run, each and every day no matter what happened or where we were or who we met, we were required to just “crack on”. So after a delightful lunch with two lovely ladies from England DaveRisner (literally) brought to the table at the rooftop of the Hotel Pushkar Paramount Place, we left. On our way out as we turned the roundabout, we ran into the hotel proprietor (Nishant) on his motorbike with his little girl. He gave us directions leading us out of town.

As with every day we were in India, we learned a life lesson; some days, more than others. Leaving Pushkar today proved no different.

Beware the narrow road. We failed trying to get out of Pushkar by following directions of someone that instructed us to go through the middle of a marketplace. As we traveled closer to the marketplace, the path became thinner and thinner, until we could barely get through…the people were yelling at us, the motorbikes had to turn around, and the shopkeepers had to move out of their stoops for us to pass. It was not good. Then, we scraped a motorbike. Hitting another person’s property or person is a very serious offense in India, and you have to make amends immediately. We were practically dragged forcibly out of the open Air Tuk Tuk, and we used every bit of diplomacy we could to try to explain that we failed in our efforts to get through the street and out of Pushkar. Finally, after much ado, and some serious threats to our person, we met the actual owner of the motorbike we scraped. He gave a small, disgusted wave to us, basically letting us off the hook for the infraction, and we were able to continue on our way. I don’t know what would have happened had he not given clemency. I am not sure I want to know.

Life Lesson: Apologize when you know you are wrong. Ask for forgiveness when you need it.

With the mob swarming around us fending off their prying hands invading our personal space, Derek and DaveRisner left our tuk-tuk to face the music. Meanwhile, I stayed behind to protect our belongings. Unaware of what was really going on behind me, but surmising that a fracas was indeed possible, I was weighing my options amidst the stares of several angry Indians. I stayed calm, but was prepared for anything. A few tense moments later, they made it back to our tuk-tuk. We left Pushkar, our lives intact. Jaipur was 145 km away on NH-48, entirely and happily uneventful.

We arrived in Jaipur just before sunset, with quite a bit less stress than our first night two days ago, our experiences to end Pushkar far behind our rearview mirror. Of course, that in no way meant that our drive to the hotel in Jaipur was not intense. A bit different than the last time Derek and I were here in 2014, we drove on the outskirts of town; and we saw a different part of Jaipur than two years ago. On our way to a hotel as close to Fort Amer (our stop the following morning before leaving town) as we could get to, there was no denying the poverty we saw. As trash piled up on the shoulder, cows and dogs and people dotted the landscape; it was tough to ignore the shanty towns adorning the side of the highway. For some reason, I thought of the hills of Alpine Valley in Wisconsin and Deer Creek in Indiana — a welcome distraction, but instead of concert goers, the crowd consisted of the poor and the very poor. It was tough to look at, though that was all we could do.

We ran into some of our Rickshaw Run mates at the hotel, had dinner, had drinks, and called it a night.

Day Three in the books. 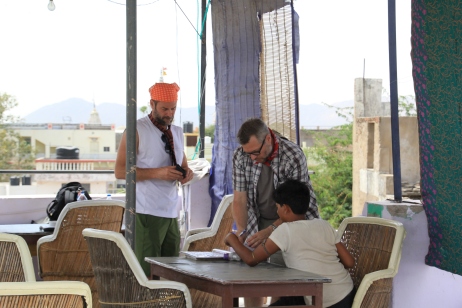 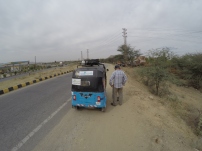 on the way to Jaipur 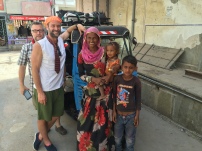 this family wanted pics with Derek and DaveRisner 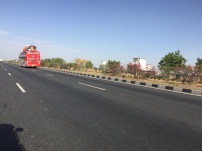 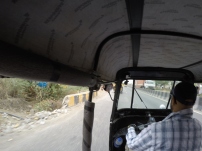 “driving along in my automobile” 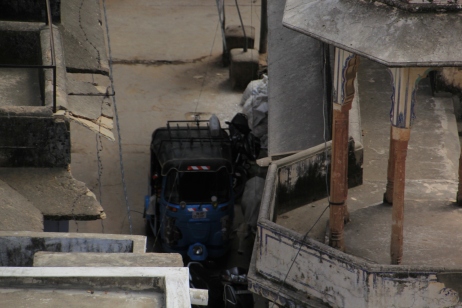 our tuk tuk safely tucked away at the hotel 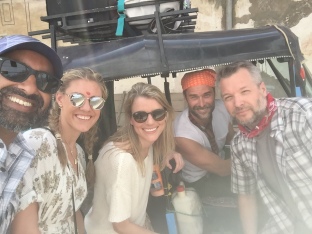 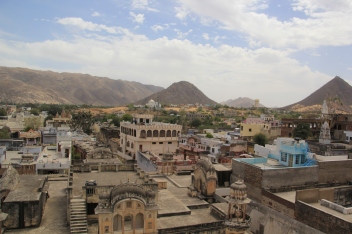